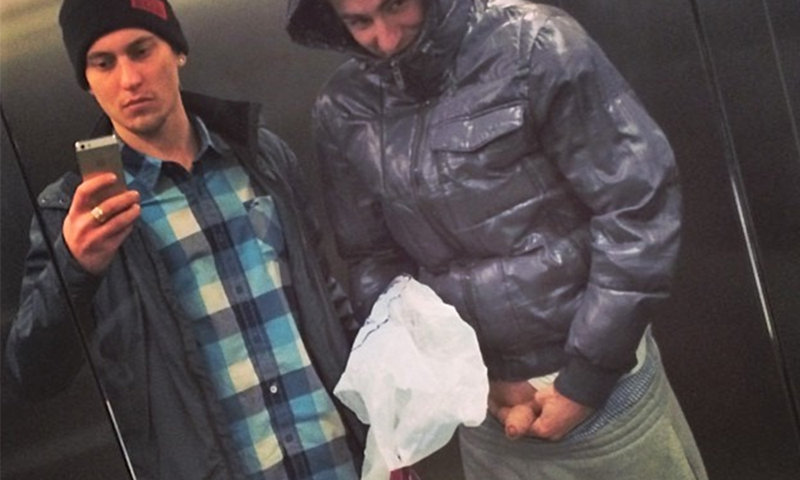 Straight guys love to flash in public, they feel cool and they do that specifically to be photographed by their friends. They don’t care such shots can become viral among friends and even on the web. How many guys flashing cocks have you seen here on the Spycamfromguys blog? I can’t count them all, but do you remember those straight guys flashing thier cocks while hugging a girl in the club? Not to mention sportsmen and rugby players: they love to flash even on the pitch, maybe after game. We even saw a few guys in suit unzipping their trousers and flashing cocks in public, for example at a wedding.

Now, today I wanna share with you a few pics and a video featuring real straight guys captured by cameras while flashing dicks in public places. Let’s start with the first shot.

Guy flashing dick in the elevator

His mate is taking a selfshot in the elevator, his friend seizes the opportunity and suddendly pulls out his nice uncut cock. Nice shot!

A classic flashing in the street

Flashing cocks in the street is nothing new, but it’s always hot watching straight guys exposing their dicks and balls in the middle of a street.

Flashing dick at a party

The video: straight guy flashing cock at the mall

The hardest is yet to come, baby! Here you are the video I promised to you. A stunning straight guy made a video while flashing his big cock in a shopping mall. Watch him pulling out his huge dick, grabbing it and showing off in public. This video is really hot!

Naked hung guy at bowling
Rugbymen naked on the metro